Sorry! You missed Father John Misty and Jason Isbell at Pavilion at the Music Factory 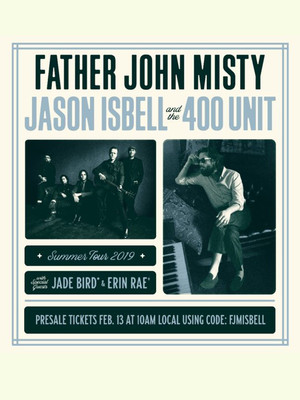 Father John Misty is the stage name of former Fleet Foxes drummer Josh Tillman, and his songs swing between arch self commentary and lushly orchestrated love songs. 2018's God Favorite Customer was a relatively pared down album of tracks that explored life on the road and the struggles of maintaining relationships. Touring partner Jason Isbell, who is referenced in Misty's track 'Mr. Tillman', is one of modern country's shining lights. He specialises in ruminations on religion, love and his own struggles with addiction, that never forsake his Alabama roots. An always in demand songwriter, he has contributed to the soundtrack of A Star is Born and has four Grammy Awards to his name.

FJM was a new experience for me. Will definitely look more into the music.... more

Jade Bird was great till she abruptly walked off stage mid-song, not to... more

Sound good to you? Share this page on social media and let your friends know about Father John Misty and Jason Isbell at Pavilion at the Music Factory.