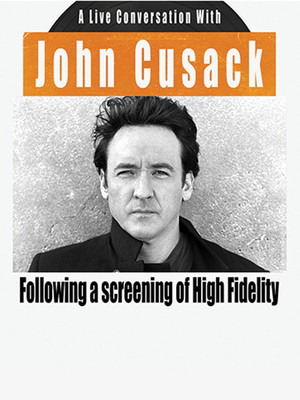 What came first - the music or the misery?

Join John Cusack for a special screening of his seminal movie 2000 High Fidelity, followed by a Q&A where you can quiz the actor on the experience of movie making.

Telling the story of commitment-phobic record store owner Rob Gordon, his obsession with music, making Top Five lists, and his search for meaning after a break-up, High Fidelity is deft love letter to music, featuring tunes from The Kinks, Dylan, Elton John, The Roots, Stiff Little Fingers and many, many more, scoring Rob's quest to find happiness. Starring Cusack, Jack Black and even including a cameo from The Boss himself, it's a tightly written comedy with a philosophical edge and is widely lauded as one of Cusack's best ever performances committed to celluloid.

Based on the book by Nick Hornby, it was something of a pet project for Cusack, who went about gaining the rights and moving the action from North London to his hometown of Chicago, a move praised by the Hornby who said 'at times, it appears to be a film in which John Cusack reads my book.' Later it went on to be adapted into a Broadway musical, but the less said about that, the better.

Trish: “Definatly Worth It”

John Cusack was everything and more than I expected. Very open, honest,... more

The blowhard annoying DJ who interviewed John after the movie was terrible... more

Sound good to you? Share this page on social media and let your friends know about John Cusack at Majestic Theater.