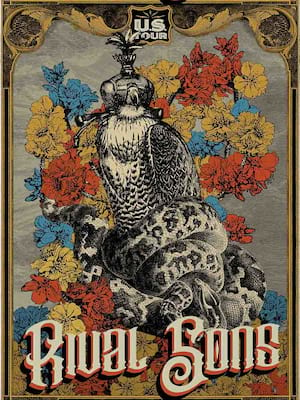 Rival Sons gel so well together and this is particularly the case during their epic performance of "Torture". As the song plays out, it ebbs and flows into bluesy and trippy breakdowns, with each member of the band coming into their own.

Long Beach, California's very own Rival Sons are proving that the spirit of rock 'n' roll is still very much alive and kicking with every raucous note, flaming guitar lick and high octane show. Having built an avid fan base and amassed over 21 million streams on Spotify since their self-released debut album Before The Fire in 2009, the blues rock revivalists are taking a big bite out of the new year with a headline tour in support of their 2019 Grammy-nominated sixth studio album Feral Roots.

The album's lead singles 'Do Your Worst' and 'Back In The Woods' have dominated the rock radio charts, heralding a return to fine form for the group, whose melding of gritty verses, bombastic choruses and driving, anthemic outros have garnered them a reputation for electric live shows that pull no punches. At ease in dive bars and music halls as they are in stadiums and arenas, frontman Jay Buchanan and co pull off passionate performances that would have Led Zeppelin in their prime shaking in their skintight bellbottoms. Wear comfy shoes and get ready to mosh until you drop!

I thought sound was fine. Very loud for sure, but still OK. As far as... more

Three friends and I attended the concert last night. Everyone was surprised... more

Sound good to you? Share this page on social media and let your friends know about Rival Sons at Granada Theater.