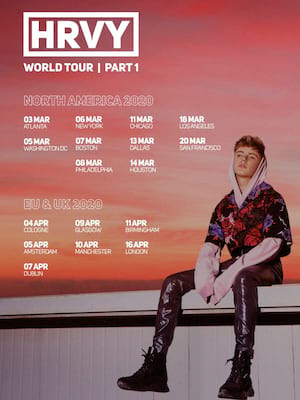 Social media phenomenon and Brit singing and songwriting superstar HRVY gears up for his first-ever world tour, featuring a string of North American dates! Real name Harvey Leigh Cantwell, he first rose to fame after he was encouraged by his friends to post videos of himself performing to Facebook, which piqued the interest of the music industry. Soon, Cantwell signed to Universal Music and re-emerged into the spotlight as HRVY in 2013. Now the creator of hit singles 'Talk To Ya', 'Personal' and 'Hasta Luego' is back and ready to delight fans once more.

Sound good to you? Share this page on social media and let your friends know about HRVY at Cambridge Room at House of Blues Dallas.