Sorry! You missed Matt and Kim at The Bomb Factory 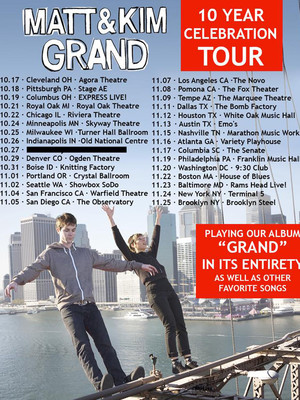 Going to a Matt and Kim concert is like going to the circus. You go to see that great finale.

Why See Matt and Kim?

Matt and Kim are grand!

The DIY indie dance pop duo Matt and Kim are anything but your average synth-punk outfit. Formed over a decade ago without much knowledge of their chosen instruments, their 2006 debut EP was widely embraced and the pair toured with a ferocity that saw them playing top festivals and signed to the independent Fader Label. Now they hit the road in support of Grand, celebrating 10 years since its breakthrough!

With a penchant for putting on crazy shows, Matt and Kim's onstage energy is as infectious as their pop-tinged, upbeat, singable tunes. There are on-stage antics and dance moves aplenty (from both band and audience) as balloons cascade and confetti bursts into the air. Audience sing-alongs are encouraged, if not mandatory. For a party atmosphere and fun-filled evening, look no further.

Seen Matt and Kim? Loved it? Hated it?

Sound good to you? Share this page on social media and let your friends know about Matt and Kim at The Bomb Factory.