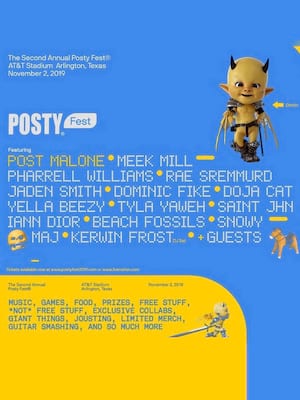 Posty Fest returns for its second year in 2019! This year's line up sees the likes of Pharrell Williams and Meek Mill join Post Malone on stage. Multi-platinum artist Post Malone continues to be one of the most talked-about artists in the music 'biz. Topping charts with hits like "Congratulations", "Rockstar" and "Better Now", Post Malone has garnered fans from across the world and has garnered himself four Grammy Award nominations.

Also on the bill will be Rae Sremmurd, Jaden Smith and Dominic Fike. But Posty Fest isn't just about the music, the mini-festival will also feature food, games, prizes as well as jousting, guitar smashing and much, much, more!

Sound good to you? Share this page on social media and let your friends know about Post Malone at AT&T Stadium.