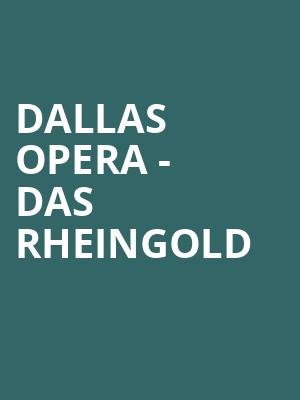 Gods and goddesses, giants and gnomes...let the adventure begin!

Wagner's monumental Ring Cycle begins anew at the Winspear Opera House this season, with this exciting new production of Das Rhinegold, starring Nicholas Brownlee and Amanda Echalaz. Loosely based on the Norse saga 'The Song of the Nibelungs', the ambitious epic follows the journey of a powerful ring and the fortunes (and misfortunes) of those who seek to wield it.

Embittered by his failed attempt to seduce the three Rhine Maidens, the sly dwarf Alberich steals the precious river gold, forging a ring of power and enslaving his fellow dwarves in the Underworld.

Meanwhile, Woton, King of the Gods is embroiled in a complicated battle with the giants Fasolt and Fafner who demand a rich payoff for building Valhalla, the magnificent new home of the immortals. When Woton hears of Alberich's ring of power, he seeks to steal it and pay his debt. But at a heavy price, for the ring is fatally cursed and ruins the lives of all those who come into contact with it...

Prepare yourself for the dense world of warring Gods, monsters and mythology in this rich tapestry of a production, scored by one of opera's most famous and bombastic composers.

Sung in German with English Supertitles

Sound good to you? Share this page on social media and let your friends know about Dallas Opera - Das Rheingold at Winspear Opera House.