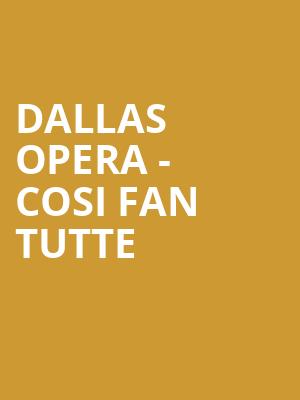 Photo by Alexander Naglestad on Unsplash

that rocks with energy, gaiety, verve and abundance

Flirtation and fidelity are the order of the day in Mozart's sublime opera buffa Cosi Fan Tutte (which translates are 'women are all, and always so.') Directed by Michael Cavanagh, with dazzling sets by Erhard Rom and delightful costumes from Constance Hoffman, this Dallas Opera production of the celebrated sonic comedy unfurls its exquisite arias in a luxurious 1930s country club, where two soldiers make a wager that'll change their lives forever.

Two Sisters, Fiordiligi and Dorabella are persistently wooed by a pair of foreigners while their soldier fiances are away at war, but this is just a test of fidelity set up by the philosophizing master of ceremonies, Don Alfonso who gains a collaborator in Despina the maid. Alas, the foreigners are in fact they're betrothed in disguise. Guglielmo and Ferrando set out to seduce the other's partner in order to win the wager set before them by Alfonso. Over the course of the deception, the young couple's definition of love and certainty is thrown off-kilter, with their feelings revealed to us through Mozart's masterful score.

Sung in Italian with English Supertitles

Sound good to you? Share this page on social media and let your friends know about Dallas Opera - Cosi Fan Tutte at Winspear Opera House.