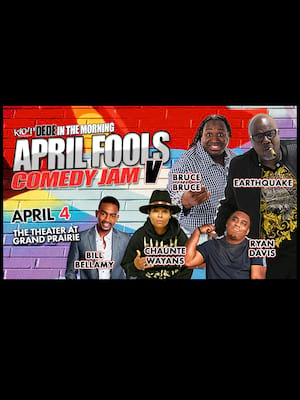 For Bill Bellamy, stand-up comedy is about big laughs and good times, but it's also about tapping into a shared moment with an audience.

The perfect excuse to laugh until your sides split, the April Fool's Comedy Jam brings together the comic talents of a host of celebrated stand-ups out on tour! Don't miss the hilarious Bruce Bruce, Earthquake, Billy Bellamy, Ryan Davis and, Chaunte Wayans as they join forces and get the audience rolling in the aisle with their quick wits, wry observations, and no-holds-barred humor.

Drawing on his experience of growing up in Newark, Bellamy is a true story-teller, combining subtle visual comedy with astute observations. With style and panache, the lightning-fast comedian draws the audience in with intelligent verbal artistry; there are no cheap shots, over-the-top rants or yawn-inducing cliches here!

Sound good to you? Share this page on social media and let your friends know about April Fools Comedy Jam at Verizon Theatre.