Sorry! You missed Anderson .Paak at Pavilion at the Music Factory 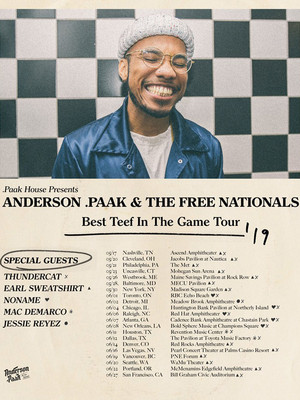 best teef in the game tour

Not one to allow hardships to get the better of him, Californian born Anderson .Paak heads out on his Best Teef In The Game tour in 2019 in support of his brand new release Ventura. Accompanied by his Free Nationals band, .Paak brings his Grammy-nominated soul-filled, singer/songwriter infused rap to you.

Born in Oxnard .Paak released his first album back in 2012 under a previous name, Breezy Lovejoy, however, it wasn't until his second album as Anderson .Paak 'Malibu', that the star started getting the recognition he deserves. With Dr. Dre as his mentor .Paak's music has received both critical and commercial acclaim, being named as one of XXL's freshman alongside the likes of Lil Dicky, Lil Uzi Vert and 21 Savage.

The Up Coming Show Used under Creative Commons License

paac and the nationals stole the show in a venue that seemed made for them.... more

Great venue to showcase an entertainer (I don't use that word lightly)... more

Sound good to you? Share this page on social media and let your friends know about Anderson .Paak at Pavilion at the Music Factory.