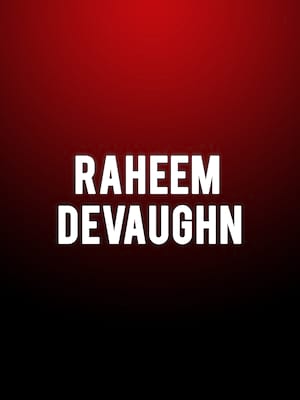 In the meantime, look for Raheem Devaughn to continue to scintillate, titillate and seduce with his most-authentic soul stylings amidst this intoxicating, mood-altering collection of songs he's poured his heart and soul into.

Paying his dues in Washington D.C's underground R&B scene, soulful crooner Raheem DeVaughn is living proof that R&B artists can be progressive and traditional at the same time, making their own success without the help of mainstream radio airplay. Writing, recording and releasing under his own steam and label Raheem Enterprises, the gifted singer-songwriter continues to make waves in the industry on his own terms. Don't miss him as he hits the road with his latest album The Love Reunion.

Released in 2019, his seventh studio album features a heady reggaeton, funk and Afro-latin fusion of danceable anthems and jazz-tinged, heartfelt ballads. The Grammy-nominated artist continues to defy whatever labels critics may throw at him, his sultry blend of boudoir-ready slow jams and mid-tempo grooves speak to an ardent following of fans that span three generations of listeners.

Sound good to you? Share this page on social media and let your friends know about Raheem Devaughn at Music Hall at Fair Park.