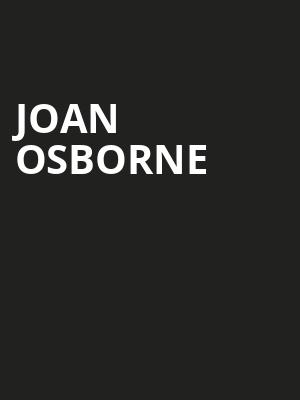 Perhaps best known for her ubiquitous mega-hit cover of Eric Bazilian's 'One Of Us', Joan Osbourne parlayed her single's phenomenal success into a long-lasting career thanks to her expertly crafted fusion of folk, rock, country and blues, as well as a fearless pioneering spirit. Don't miss the 90s icon as she hits the road in true freewheeling troubadour style.

The seven-time Grammy-nominated, platinum-selling singer displayed a fierce independence early on in her career when she moved from her hometown of Anchorage, Kentucky to start her own record label and release independently in New York in the 1980s. Her raw, emotional music and sonorous voice caught the attention of Mercury Records, and her professional career reached stratospheric heights thanks to the release of her first major-label album Relish in 1995. Over eight albums and over two decades later and Osborne is still blazing trails - touring, creating and supporting social justice issues like women's and LGBQT equality.

Sound good to you? Share this page on social media and let your friends know about Joan Osborne at The Kessler.