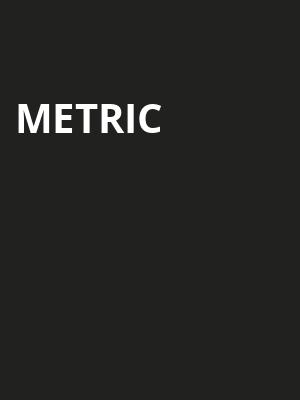 ...I want Metric fans to have the best concert experience possible and feel like they got to escape into another reality with us for the evening.

Formed in 1998 in Toronto, Metric is one of the few indie-rock bands that can pull off a dance-influenced sound whilst still retaining their original fan base, but also one of the few bands whose line-up hasn't changed over the years. Originally formed as a duo with just Haines and guitarist James Shaw in 1998 under the name Mainstream (not quite as catchy we reckon), they expanded to include two additional band members in 2001.

Now ready to launch a new era with the 2022 release of their eighth studio album, Formentera, Emily and co are hitting the road again on the Doomscroller Tour, where they promise deep cuts and fan favorites alongside showcasing the much anticipated new record!

Seen Metric? Loved it? Hated it?

Sound good to you? Share this page on social media and let your friends know about Metric at House of Blues.