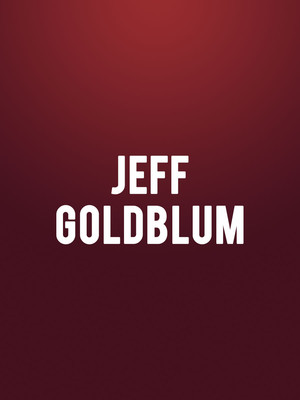 If it wasn't enough that Hollywood heavyweight proved himself one of the greatest actors of our times in feature films such as Jurassic Park, The Fly and Independence Day, as well as the master of resulting memes thereafter, the multi-talented maestro has also been tickling the ivories with the Mildred Snitzer Orchestra at the Rockwell club in Los Angeles, a weekly residency that came about after he took his love of jazz to the stage in the mid 1990s. Jeff and his orchestra are hitting the road this summer, so don't miss the chance to see the 'Blum bloom on stage.

Its no surprise that beneath his Puck-like exterior, the iconic performer has a keen ear for the swinging rhythms and musicality demanding by jazz - his very voice and its syncopated 'ums' and 'uhs' are reminiscent of bebop and scat. In 2018 he recorded his debut studio album The Capitol Studios Sessions which featured a range of songbook covers like "Cantaloupe Island', 'My Baby Just Cares For Me' and 'Caravan' as well as collaborations with guest artists Imelda May, Sarah Silverman and Haley Reinhart. It hit number one on both the Jazz Albums and traditional Jazz Albums charts shortly after its release.

Sound good to you? Share this page on social media and let your friends know about Jeff Goldblum at Annette Strauss Square.