Sorry! You missed In Conversation with John Cena at Winspear Opera House 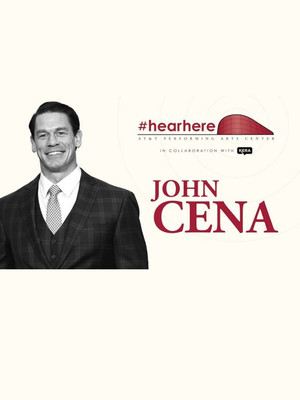 In Conversation with John Cena

In the past three years, Cena has become a reliable highlight of whatever project he's in

Why See In Conversation with John Cena?

An Evening Of Conversation With John Cena

The fifth season of the AT&T Performing Arts Center's speaker series #hearhere is upon us and its roster is more diverse than ever! Taking to the Winspear Opera House stage on April 25th is none other than pro wrestler turned Hollywood movie star and producer John Cena, a multi-talented man who's proving there's more to his muscle - in addition to his sporting and acting pursuits, he's also the most requested Make-A-Wish granter of all time, a motivational speaker and a philanthropist.

Under the moniker 'The Prototype', Cena's first foray into the world of wrestling resulted in a Ohio Valley Wrestling heavyweight title win in early 2002, and he made his WWE debut that same summer. Seventeen years later, not only is Cena the face of the professional wrestling federation but is a 16-time World Champion. Expanding his entertainment brand, he's acted in over 30 feature films including 2018 teen comedy Blockers, Amy Schumer's Trainwreck and new British release Fighting With My Family.

Sound good to you? Share this page on social media and let your friends know about In Conversation with John Cena at Winspear Opera House.