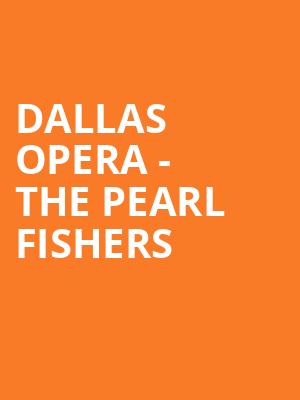 Friendship is on the line in this lushly exotic precursor to Carmen in Georges Bizet's The Pearl Fishers, presented with an all-star cast by the Dallas Opera, replete with spectacular sets and costumes. Although a rare addition to many opera company's seasons throughout the world, The Pearl Fishers is by no means an operatic dud. In fact with its sweeping arias, beautiful setting in the ancient world of Ceylon (now Sri Lanka), and central themes of love and loyalty, it is a shining gem from Bizet's early career.

On a beach in ancient Ceylon, lifelong friends Zurga and Nadir are reunited after nearly a year apart. The two pearl fishermen recount the event that first drove them apart - the fleeting glimpse of a priestess Leila, with whom both fell instantly in love. However, determined not to let their friendship go to waste, they had sworn never to quarrel over a woman again.

It's at this moment that a boat arrives on the shore, with a beautiful female temple girl sent to bless the fisherman before they set sail on their next treacherous journey. And it just so happens that the girl in question is Leila. As Nadir recognises her, his passions are inflamed once more and he sets about to pursue her, breaking the oath he swore with Zurga just moments before. Declaring his love for Leila results in an angry mob storming her temple. as they believe her to be desecrated and resulting in their sentence to execution by funeral pyre. But will Zurga overcome his jealousy enough to save his friend and true love?

Seen Dallas Opera - The Pearl Fishers? Loved it? Hated it?

Sound good to you? Share this page on social media and let your friends know about Dallas Opera - The Pearl Fishers at Winspear Opera House.