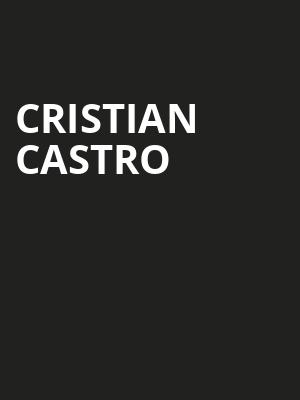 Arguably one of Mexico's most recognisable male performers

Son of the legendary Mexican actress and singer Veronica Castro, Latin pop music stalwart Cristian Castro stepped out from this considerable shadow to form a lasting legacy of his own. Known for his suave persona, the sex symbol constantly reinventing himself and maintains a constant presence on the music charts.

Castro first made waves in the 90s with smash hit singles Nunca Voy a Olvidarte and Manana, and over two decades later a tireless work ethic and constant outpouring of music make him a force to be reckoned with on stages all over the world. The showman is known for sizzling live shows, charming fans left right and center with a kilowatt smile and sonorous, rich voice.

Sound good to you? Share this page on social media and let your friends know about Cristian Castro at Texas Trust CU Theatre.