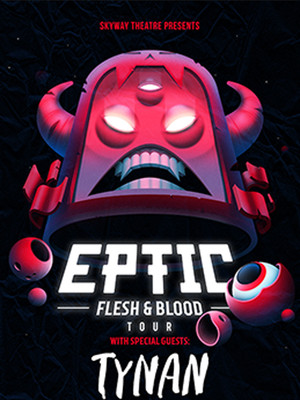 Belgian producer and DJ Eptic has proven himself amongst his dubstep and bass house peers with his tenacity in production and visceral performances.

Legend has it that Belgian Dubstep upstart Eptic was born when Michael Bella stayed over at his friend Chico's house and took his first sip of Chico's high powered, nitro blend caffeine. Sixteen cups of the cosmic brew later and Bella had transformed into Eptic, an up and coming artist known for channeling his chaotic energy into wild, unruly drum N bass, trap, and electro-house-infused dubstep anthems. Don't miss him on the Flesh & Blood tour.

Starting out as one of EDM's hidden gems, the 25-year-old has worked his way from the underground into the mainstream, releasing a series of ambitious remixes, collaborations and EPs since 2001, each one with a bigger sound than the last. Combining creative sound design and bone-rattling bass, Eptic's pulse-quickening epics are filled with sci-fi characters and adventures of his own imaginings. Wear some comfortable shoes and lose yourself in the madness as the young bass prodigy unleashes his monster sound on the dance floor.

Seen Eptic? Loved it? Hated it?

Sound good to you? Share this page on social media and let your friends know about Eptic at Stereo Live Dallas.