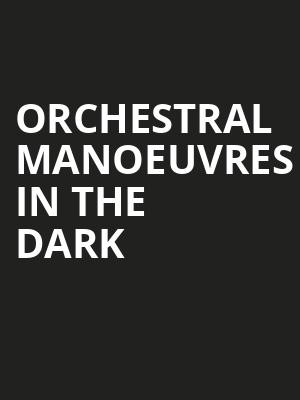 Orchestral Manoeuvres In The Dark

Why See Orchestral Manoeuvres In The Dark?

Orchestral Manoeuvres In The Dark or OMD are celebrating 40 years and bring their Souvenir Greatest Hits Tour to fans across North America. OMD have been proffering their synth-pop and post-punk sounds for four centuries, originally formed by two British teens in the late 70s whose early albums 'Architecture and Morality' and 'Dazzle Ships' shaped the sound of the 80s.

To celebrate the 40th anniversary of their career, OMD have released a brand new album featuring all of their hit singles from 1979 until 2019. A comprehensive collection which includes Electricity, Enola Gay, What Have We Done, plus a brand new single to celebrate the big 40, Don't Go.

It's going to be a night of great music and celebration!

Some venues 18+ only, please check with venue before booking

Seen Orchestral Manoeuvres In The Dark? Loved it? Hated it?

Sound good to you? Share this page on social media and let your friends know about Orchestral Manoeuvres In The Dark at South Side Ballroom.