Sorry! You missed Seventeen at Pavilion at the Music Factory 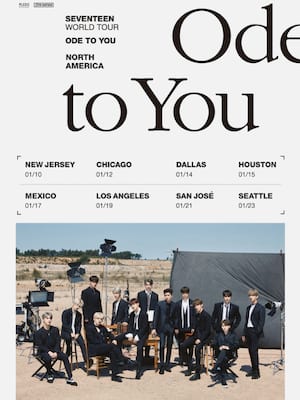 K-Pop Phenomenon Seventeen returns to North America on their brand new Ode To You world tour! The all-singing, all-dancing thirteen-member megalith dominated the charts when they debuted in 2015, holding the position of longest-charting K-Pop album of the year in the US after the release of their debut 17 Carat. Now ready to showcase their third studio album 'An Ode', we promise this is going to be one experience Carats will not want to miss!

Combining their world wide recognition with a DIY approach, Seventeen divides themselves into three subunits - one that specializes in hip-hop, one in live performance and one in vocals. Deeply involved in the production of their own work, they've earned the moniker of Korea's top self-producing idol group. Don't miss them on their first world tour since 2017's Diamond Edge.

Seen Seventeen? Loved it? Hated it?

Sound good to you? Share this page on social media and let your friends know about Seventeen at Pavilion at the Music Factory.