Sorry! You missed Natalia Lafourcade at Pavilion at the Music Factory 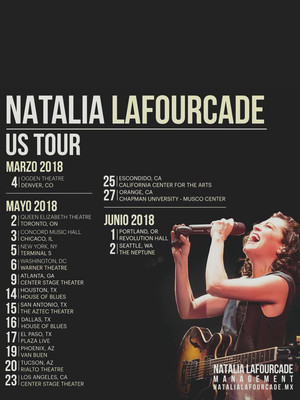 Lafourcade's music combines the hope and desire of the soulful Lola Beltran, the classical melancholy of composer Agustin Lara, and the simplicity and sincerity of ranchera hero Jose Alfredo Jimenez - all while remaining firmly within the contemporary po

Natalia Lafourcade Merges Past and Present

Maria Natalia Lafourcade Silva represents the new generation of Mexican musicians, fusing the traditional sounds of Latin Pop and bossanova with modern pop arrangements and recordings. Her lyrical soprano voice and introspective, poetic lyrics have earned the songstress an astounding 10 Latin Grammy Awards to date, marking her as one of modern Latin music's most successful singer songwriters.

Lafourcade is hitting the road again, bringing her latest blend of the traditional and the modern to stages across US shores. The enchanting performer weaves a spell-binding live show with a soft and deeply expressive voice that calls to mind the timeless love songs of her musical predecessors.

Sound good to you? Share this page on social media and let your friends know about Natalia Lafourcade at Pavilion at the Music Factory.