Sorry! You missed Hammers House Party at Pavilion at the Music Factory 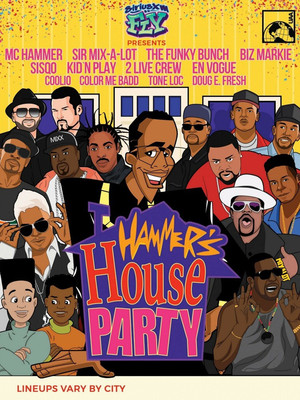 A night of iconic artists, live!

Hammer's House Party is on the road this summer, bringing you a chocka-block night full of the biggest hip-hop sounds of the '80s and '90s. Featuring iconic artist M.C. Hammer on his first major tour since 1991, the line up also includes appearances from Sir Mix-A-Lot, the Funky Bunch, En Vogue, Coolio, Kid 'n Play and many many more*! So grab your voluminous pants and prepare to get down at Hammer's House Party when it steps into town!

As one of the stand-out artists of the 1990s M.C Hammer paved the way for other hip-hop stars as he busted hip-hop into the mainstream. With his iconic track "U Can't Touch This" M.C Hammer changed the game, bringing a whole new dance craze to the global population! Hammer also brought showmanship and extravagance to his concerts, introducing his loyal fans to a new way of concert-going.

*Line up varies by city, check local listings for your fantastic artists!

Photo by Kay on Unsplash

Sound good to you? Share this page on social media and let your friends know about Hammers House Party at Pavilion at the Music Factory.