Sorry! You missed Pentagon at House of Blues 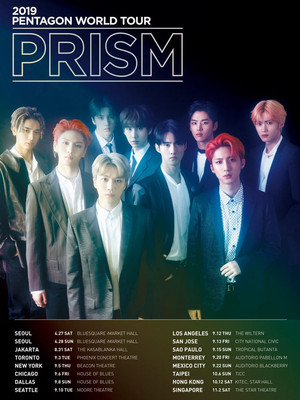 K-pop nonet Pentagon is bringing their Prism tour across the globe. The group's 2019 world tour is taking them to countries across Asia as well as North and South America.

Pentagon Embark on Their First Tour Around the World

K-POP boyband Pentagon formed in South Korea in 2016 and released a self-titled EP. Upon their debut, the band became number nine on Billboard's 10 Best New K-Pop Groups and now prepare to embark on their first ever world tour. This follows the release of the band's eighth EP, 'Genie:us,' which came out in March.

The EP was described as adding "yet another layer to the group's evolving, distinct sound, setting them apart in an industry saturated with big-name boy groups" by K Pop news magazine The Kraze. Pentagon have previously been nominated for two Asia Artist Awards as well as receiving many other nominations. The band won the Korea Music Festival Special Award in 2017 and the Korea Culture Entertainment Award in 2018.

Seen Pentagon? Loved it? Hated it?

Sound good to you? Share this page on social media and let your friends know about Pentagon at House of Blues.