Sorry! You missed Falling In Reverse at House of Blues 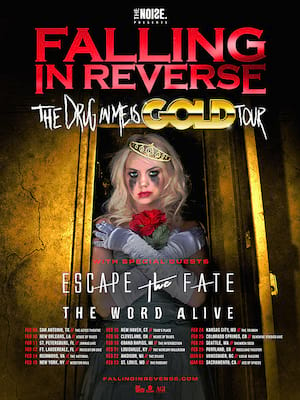 Falling In Reverse continues to champion the outsider, the cast aside, the underestimated, making music to empower and inspire life's underdogs.

Why See Falling In Reverse?

The Drug in me is gold tour!

Nevada native rockers Falling In Reverse prepare to tour North America, join the band in celebration of their incredible milestone; their debut record The Drug In Me Is You just certified Gold! The band who formed in 2008, consist of Ronnie Radke on vocals, Derek Jones and Max Georgiev on guitar, Zakk Sandler on the keyboard and Tyler Burgess on bass.

Joining Falling in Reverse on the road are metalcore band The World Alive, and rock band Escape The Fate. The Drug In Me Is Gold tour will see the band playing the record in its entirety, showing fans why it's been certified! As well as additional fan-favorite hits.

Seen Falling In Reverse? Loved it? Hated it?

Sound good to you? Share this page on social media and let your friends know about Falling In Reverse at House of Blues.