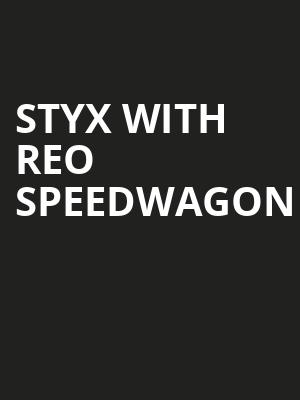 Don't fight the feeling - see these legends of big-hearted rock!

Why See Styx with REO Speedwagon?

You read that right - Styx & Reo are hitting the road. These two giants of 70s rock both saw huge success in the 70s and 80s, and now they are back together on the Live & UnZoomed summer tour, and bringing along Loverboy for the ride.

Led by songwriting talents of Dennis De Young, Tommy Shaw and James Young, Styx racked up hit after hit, swinging from dirty, riff-heavy rockers, to open-hearted soaring ballads at the touch of a button, with their biggest numbers including 'Babe', 'Mr. Roboto' and 'Boat on the River'. These hard rocking Midwesterners are the stuff of legend! Formed in 1967, the Illinois-raised REO Speedwagon topped the charts with their 1980 album 'Hi Infidelity', which became the soundtrack of a generation, and further spawned the emotional rock ballad 'Can't Fight This Feeling.'

Oz: “Great concert but one band too many”

Felder and his band were superb both musically and vocally...his vocals... more

Beth: “Styx and Felder were stellar; REO, not so much”

I went to the Styx/REO concert anticipating a great show and Don Felder... more

Sound good to you? Share this page on social media and let your friends know about Styx with REO Speedwagon at Dos Equis Pavilion.