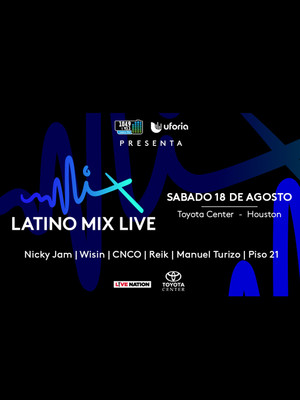 The home of Latin Music and Radio, the Uforia app has championed Latin artists with exclusive releases and easy-to-share playlists and stations, making their music more accessible than ever. Partnering with Live Nation, the app company presents Latino Mix Live, a live concert that features some of Latin music's most exciting artists. 2019 sees the likes of J Balvin, Bad Bunny, Dalex, Reik and Sech all perform!

Headliner Bad Bunny began his music career by uploading tracks to the online music site, SoundCloud where his song "Diles" was picked up by DJ Luian and signed Bunny to his record label. Now with countless top ten hits in the Latin American charts, Bad Bunny has become one of the biggest Trap artists of the genre. As his popularity continues to rise the rapper has begun to cross over into the USA charts with his collaboration with mega-star Drake seeing him hit the number five spot in the Billboard Hot 100 with the track "Mia".

Sound good to you? Share this page on social media and let your friends know about Latino Mix Live at Dos Equis Pavilion.