Sorry! You missed Incubus with 311 at Dos Equis Pavilion 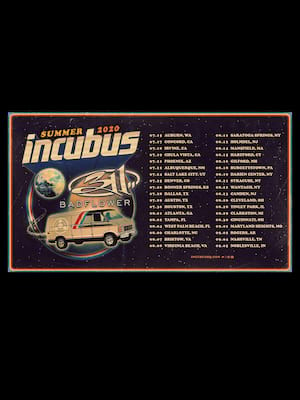 Formed in their hometown of Calabasas, California in 1991 Incubus quickly rose to become one of the most popular bands in alt-rock thanks to their tireless touring efforts and an experimental spirit. Reaching mainstream recognition, critical acclaim, and platinum-certified commercial success with the release of their career-defining 1999 album Make Yourself, the outfit rode high into the millennium as pioneers of the nu-metal genre.

Don't miss the hard-rocking quintet as they hit the road with reggae-rock pioneers 311 on a mammoth North American tour this summer. The hotly anticipated jaunt comes off the back of the release of Incubus' latest EP Trust Fall (Side B), as well as 311's 30th anniversary together as a band. It also marks the first time both bands have shared the stage in two decades. Support comes from Los Angeles pop-rock rockers Badflower.

Sound good to you? Share this page on social media and let your friends know about Incubus with 311 at Dos Equis Pavilion.