Sorry! You missed How The Southwest Was Won at Dos Equis Pavilion 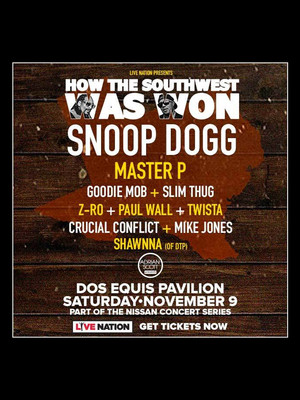 How The Southwest Was Won

Why See How The Southwest Was Won?

From the West Coast to the East Coast, the biggest names in hip hop are dusting off their iconic rhymes and converging at Dallas' Dos Equis Pavillion for one jam-packed evening of greatest hits. Don't miss the likes of the real MVP Snoop Dogg, Make 'Em Say Uhh hitmaker Master P and Cee-Lo Green's Goodie Mob, as well as a host of texan talents including Slim Thug,  Z-Ro, Paul Wall, Mike Jones and more!

Calvin Cordozar Broadus Jr. AKA Snoop Dogg, Snoop Doggy Dog, the Doggfather, Snoop Lion and Snoop Dizzle, is one of the most recognisable voices in modern era hip hop with a career that spans and defines genres including G-funk, gangsta rap and R&B. Rapping, sampling and living the high life since the mid 1990s, he's a bonafide living legend who is simply not to be missed.

Sound good to you? Share this page on social media and let your friends know about How The Southwest Was Won at Dos Equis Pavilion.