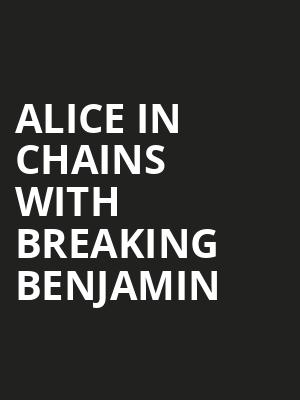 Alice in Chains with Breaking Benjamin

We are so extremely excited to be hitting the road with Alice In Chains and Bush. It's such an honour to share the stage with such amazing bands that we grew up listening to

Why See Alice in Chains with Breaking Benjamin?

'90s alt-rockers Alice in Chains are back on the road this summer for this co-headlining tour with rockers Breaking Benjamin, bringing audiences a night of rock heaven that segues from metal-tinged grunge to epic hard rock. Opening the show will be special guests Bush, who'll more than whet your appetite for the main event.

Alice in Chains
One of the most successful alternative rock act of the 1990s, Alice in Chains may have been grouped together with grunge greats Nirvana and Soundgarden, but they always boasted a harder metal edge than their contemporaries. Their greatest success came in 1992 with the album Dirt, which included the iconic singles 'Would?' and 'Rooster'.

Breaking Benjamin
Blending the prog operatics of Muse with the electro-tinged angst of Nine Inch Nails, Breaking Benjamin have swiftly become one of America's leading rock bands. Capable of summoning crunching riffs that explode into soaring choruses seemingly at will, the Pennsylvania five-piece unleashed their latest record Aurora in 2020.

Seen Alice in Chains with Breaking Benjamin? Loved it? Hated it?

Sound good to you? Share this page on social media and let your friends know about Alice in Chains with Breaking Benjamin at Dos Equis Pavilion.