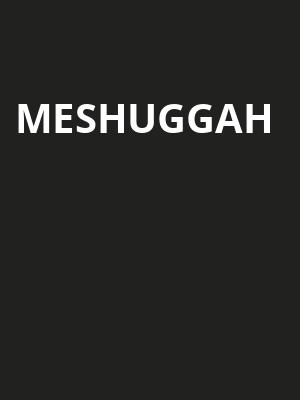 MESHUGGAH have spent the last twenty years and cumulative thirteen releases developing, exploring, and redefining their complex, inimitable approach on the art of expressing the music they hear in their heads.

Extreme metal Swedish band Meshuggah will always have a place in the metal scene and a cult-like fanbase. The tech-metal band will be heading out on a 19-date tour with Converge and Torche opening the shows. The band recently returned to the studio and are currently recording their ninth album! You'll definitely hear them before you seem them.

The band was established in 1987 in Ume, Sweden but first being prominent in the metal scene with the release of their 1995 album 'Destroy Erase Improve.' The band have since been named as one of Rolling Stone magazine's '10 Most Important Hard and Heavy Bands' and been nominated for a Grammy Award in 2018 for their song 'Clockworks.'

Since their formation, the band have released eight studio albums and six EPs. Their latest album, 'The Violent Sleep of Reason,' released in 2016 was acclaimed and called "the most organic-sounding Meshuggah album in over 20 years" by Pitchfork.

Seen Meshuggah? Loved it? Hated it?

Sound good to you? Share this page on social media and let your friends know about Meshuggah at The Bomb Factory.