Sorry! You missed Jess Glynne at The Bomb Factory 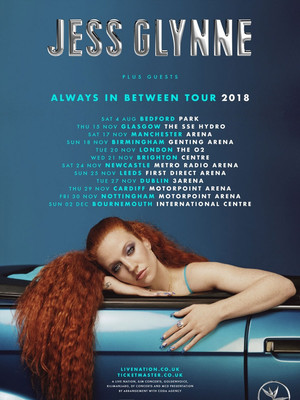 ...she's once again bridging the gap between bouncy pop-EDM and feisty soul, shaking off the malaise that's struck too many of her playlisted peers, letting Glynne serve as a one-woman rooting crew for herself and anyone in need of a peppy pick-me-up.

Jess Glynne Brings Always In Between To The US

Flame haired R&B pop songstress Jess Glynne first turned heads and ears when she made a star-making appearance on Clean Bandit's ubiquitous megahit 'Rather Be' in 2014, following up and solidifying her big break with the release of her number one debut album the following year. In 2018, she became the first British female solo artist to have seven number one singles on the UK Singles Chart when her critically acclaimed sophomore effort Always In Between ruled the music industry roost. Glynne sets her sights on US shores, bringing her hook-laden power pop anthems along for the ride on the 2019 Always In Between North American headline tour.

Counting the likes of Ed Sheeran and Tinie Tempah amongst her collaborators, as well as Frank Ocean and Amy Winehouse amongst her influences, Glynne's effervescent brand of uplifting sonic euphoria is built on the strong foundations of powerhouse vocals, skilful songwriting and messages of female empowerment and self love. Her soulful, singable tracks make for electrifying live performances that ride high on a feel good, party atmosphere, so ware some comfortable shoes and prepare to dance!

Sound good to you? Share this page on social media and let your friends know about Jess Glynne at The Bomb Factory.