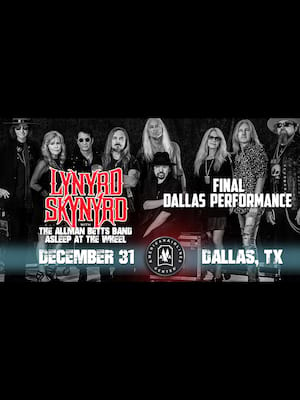 Farewell Skynyrd, it's been a blast.

What better way to ring in the new year than in the company of Southern Rock behemoth Lynyrd Skynyrd!? As the countdown approaches, you'll be able to sing along to smash hit rock classics like Sweet Home Alabama, Simple Man and Free Bird when the ever evolving collective band takes to the American Airlines Center stage on New Years Eve, joined by support acts The Allman Betts Band and Asleep At The Wheel.

Marking the final performance of their Last of the Street Survivors Farewell Tour, the show brings their celebrated journey as a band to a rousing close, for the band is to tour no more after this final jaunt. Fusing a rebellious image with a sense of rock and roll swagger and a good helping of hard rocking, gritty blues, the outfit has released over 28 million records to date and been inducted into the Rock and Roll Hall of Fame for their considerable contributions to the genre.

Sound good to you? Share this page on social media and let your friends know about Lynyrd Skynyrd New Years Eve at American Airlines Center.