Sorry! You missed Got7 at American Airlines Center 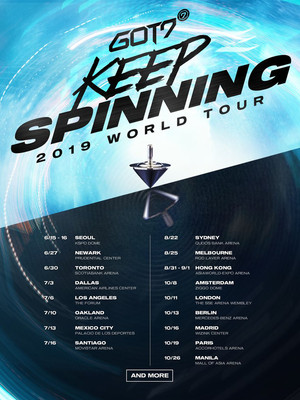 TheK-pop sensation return to US shores!

Yes! JB, Mark, Junior, Jackson, Youngjae, BamBam, and Yugyeom are returning to the states this year bringing their hugely successful brand of K-pop with them on the Keep Spinning World Tour!  Since debuting in 2014, the seven-member, multinational group have gone from strength to strength with tracks like 'Girls, Girls, Girls', 'Home Run', 'Around the World' and 'Love Train', picking up two Gold Disk Awards, one Seoul Music Award and an MTV Europe Music Award nomination.

This group are far from manufactured, with each member contributing songwriting to their ever-growing discography of synthy, catchy pop. They recently topped 200 million views on YouTube with lead single off their third EP, 'Just Right' and in dropped their 4th, "Eyes On You" in 2018. Straight after its release, Got7 secured the top position on iTunes charts. Now hoping to repeat the process with upcoming record Spinning Top, don't miss your chance to catch these idols live in 2019!

Seen Got7? Loved it? Hated it?

Sound good to you? Share this page on social media and let your friends know about Got7 at American Airlines Center.